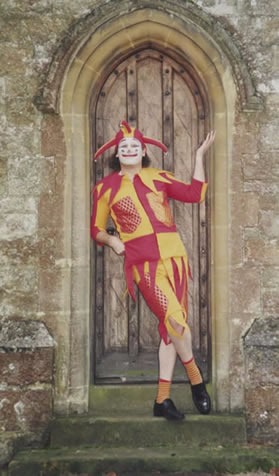 Rhubarb the Jester is one of the world’s best known fools.

Without words, he uses a blend of mime, juggling, magic, balancing, noseflute and stupidity to put smiles on faces at your event. Usually he begins with meeting and greeting and general fooling around the banquet. This can be followed by a spectacular spot which can include juggling with fire and where considered appropriate riding a unicycle, a taller unicycle and an even taller unicycle. Rhubarb has fooled at over 600 banquets at Shakespeare’s Tavern, the Beefeater by the Tower, The Hunting Lodge in Cottingham, The Tudor Rooms, Windsor Great Park and a great many others at castles and manors all over the country.